Coming up quickly, on November 1st, is one of the most well-known holidays in Latin America. Dia de los Muertos (Day of the Dead) originated in Mexico and it mixes the cultural traditions of the native Aztecs and Spanish Catholicism, which was introduced to Mexico and the rest of Latin America by the Spanish conquistadors. It is initially thought to have been a celebration that lasted the entire month of August, but after the Spaniards found they could not put an end to the “sacrilegious” ritual, they moved it to coincide with All Saints Day, a common holiday in Western Christianity.

Dia de los Muertos has been a ritual for over 3,000 years, outdating many other rituals around the world. Contrary to how many other cultures around the world view the dead, with grief and mourning, day of the dead looks to celebrate the lives of the deceased with large gatherings, food and drink, and by participating in the activities that were favorites of the dead while they were alive. 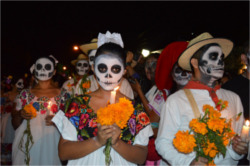 These festivities usually take place at the gravesites of the deceased that are being honored. The cultures that participate in this holiday view death as a natural part of the process of life, and on this day the dead are said to be awakened from their eternal sleep to participate in the happenings of the community once more. These cultures embrace death, which is contrary to the fear of death that many cultures have. To the Aztecs, life was the dream, and only in death were you truly awakened. Something that is not commonly known is that Dia de los Muertos is broken into two days.

November 1st is “Day of the Innocents”, which honors the children that have passed away. November 2nd, “Day of the Dead”, is the day that is reserved for honoring the deceased adults. Whereas Halloween in the US and Canada is more of a materialistic holiday, Dia de los Muertos is very spiritualistic and ritualistic. If you happen to be in Latin America during this ancient day of celebration, it is definitely something to be observed.

Below is a short video about Day of the Dead (created by CGI Student Academy). Enjoy it!